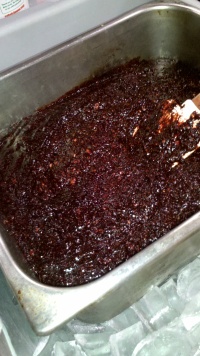 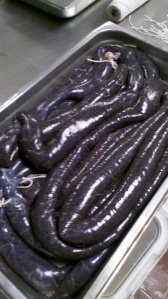 Last night I had rare opportunity to make something that I have never made before and Randy has never eaten before.  Blood sausage. We are always trying new preparations, flavor combinations etc.  But it is not often that we have the opportunity to use something that we have never used before. Especially because we limit ourselves to as many local ingredients as possible. We don’t use many esoteric or exotic ingredients. When Paula the pig arrived with a dripping bag full of  blood (I assume that  it is Paula’s blood). I knew that I would soon be attempting to make blood sausage.

Researching  a recipe that I wanted to try was a chore. Most of the recipes that I encountered had fillers such as oatmeal, breadcrumbs or flour in them. Many had dry fruit such as raisins and currants in them.  While others contained toasted nuts and still others contained both dry fruit and nuts.  The only consistent ingredient (excluding blood) was onions.  The recipe I chose to guide me through making my first batch was from one of my favorite food bloggers Hank Shaw.  His blog  Hunter, Gardener, Angler, Cook has often been a source for us.  His recipe does not contain any fillers it; it ‘s just pig meat, pig fat and pig blood with a lot of spices. I took my liberties with the spices; adding sugar, ancho chili powder, garlic, doubling the pepper and  increasing the salt by 25%.

I have had blood sausage several times including in Spain, Ireland, France and some fancy-ass American restaurants. Some of them were vile tasting like chalky liver (blah), some pretty good and one or two very good.  I remember one very good one in particular. It was while traveling in Ireland staying at a bed and breakfast in Connemara. It was one of those moments, where you realise “hey I really do like that” (whatever “that” may be).  They served a blood sausage patty that full flavored and rich, quite enjoyable.

In all the years I have been purchasing whole animals I have never received the animal’s blood. I am glad that Paula graced us with hers.  The resulting sausage we made came out excellent.  At the end of the shift last night Randy, Russel (one of the lead cooks), Kristen (manager) and I cooked up a couple of the sausages.  It was unanimous they are delicious. We will be serving them with white bean puree, wilted kale and pickled ramps.

The photos are in succession starting with the blood being strained, then the sausage mix(blood, meat, fat and spices), next the sausage mix is filled into casings, followed by tied into links, then being poached and finally seared, on a plate moments before we ate them.