My parents were visiting us over the Thanksgiving long weekend and my father Walter mentioned that Americans are now able to travel to Cuba and that he wanted to go.  He noted that my mother Carolyn had no interest in going.  I immediately chimed in that I would be happy to go with him.  My dad had visited Cuba before the embargo, while attending the University of Miami in the mid 1950’s.  He has always talked fondly about the country and has often expressed a desire to return.

Within a few days I reiterated my willingness to go with him, that was all the motivation he needed.  He jumped on it, in no time flights and an Airbnb where booked.

Wally, as his friends, and sometimes I refer to my dad, is conversational in Spanish.  I on the other hand understand quite a bit and speak very little, which is a shame.  I work in restaurants where at least half of the employees first language is Spanish.  I also have a brother who has lived in Spain since the early 90s whom I have visited upwards of twenty times.  I should really have a much better grasp on the language than I do, hopefully I will suck-it-up and learn more.

I met my dad at his house in Florida so we could depart very early the next morning for our flight on JetBlue from Fort Lauderdale to Havana.  The flight was very sort, 45 minutes total flying time.  The first thing I noticed in Havana was how nice and accommodating the Cuban people were, very outgoing yet relaxed.  We arrived several hours early to the Airbnb and were greeted warmly, told not worry, it was not an issue.

I have always heard about the old American cars in Cuba and figured that they would be a few here and there for the tourists.  I was wrong about that, I would estimate 70% of all cars were American models from the late forties and fifties.  No car, old American or new Russian, had anything that we would consider pollution control.  Straight exhaust streamed out of tailpipes or up through floorboards, as we experienced in one taxi.  It was really nasty, walking around the city you could taste it!  For many reasons this needs to be fixed. 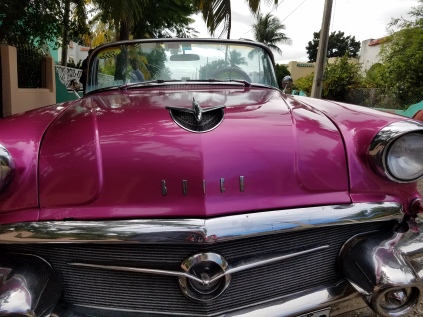 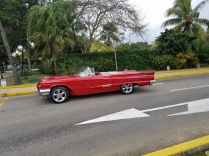 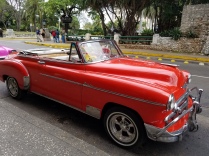 I had read in several publications not to expect much when it came to food.  Most of the restaurants are government owned and there was not much emphasis on creativity or quality.  This proved to be very true, the food we experienced was blah!   We went to a couple of restaurants recommended to us by locals and they just kinda sucked, no love for the food at all.  Considering the quality of the food it was also expensive, $20 -$25 for a piece of grilled fish or some braised beef is fine, but it should be at least adequate.  At each of the restaurants we visited we ordered the main item – fish or meat and it was served with rice, beans and vegetables, nothing interesting.  I have read that some privately owned restaurants, Paladares,  located in private homes are supposed to be better than the government run restaurants.  The problem is they don’t have websites, not that with the very limited wifi you would be able to Google a Paladare.  Next time I visit I plan do more research ahead of time to find some better dining options.

A few of the restaurants we dined at. 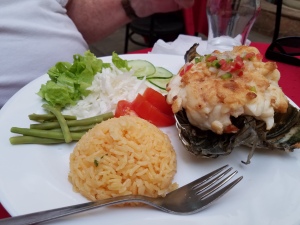 Our best meal each day was breakfast, prepared in our flat by Juanita, our maid.  She would arrive before we woke, have coffee ready at the predetermined time, then she would proceed to make us breakfast which included fried eggs, ham, cheese, a selection of fruit, toast, butter, jam and juice.  Then she would clean up after breakfast as well as the rest of the flat. The breakfast cost the equivalent of 5 U.S dollars, a real bargain, and Wally was able to practice his Spanish with her.

Wally with Juanita, the remnants of Juanita’s breakfast.

If you like light crisp Caribbean style beer the indigenous Cristal is adequate, I drank several.  I was able to find an ocean-side table with a nice view at the Hotel Nacional de Cuba each evening.  The locals have an affinity to Heinekin, personally I would rather not drink than let that insipid liquid touch my lips.

mediocre beer with a great view 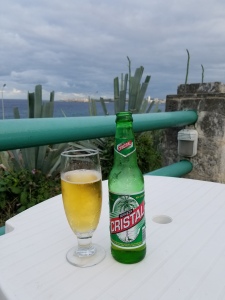 I had a great trip with my dad, we have not had a lot of opportunities to spend undisturbed time together like this. It was a wonderful trip and I will cherish the time spent with my dad.

Havana is a beautiful city steeped in culture, here are some scenes from around the city.

A fisherman avoiding the sea spray on the Malecon

Commonplace food service out of the windows of private homes

A couple of markets, note that there was no refrigeration for the meat. 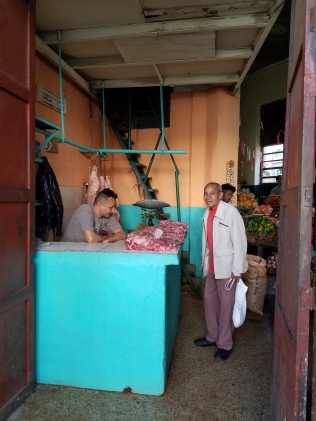 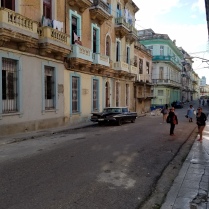 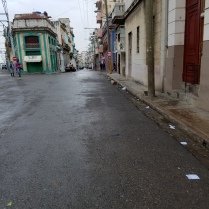 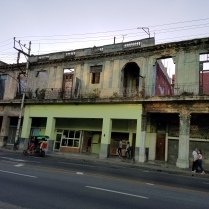 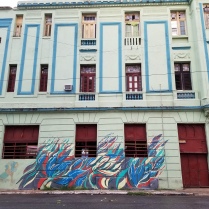 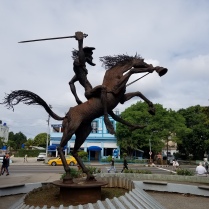 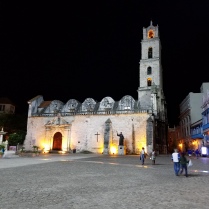 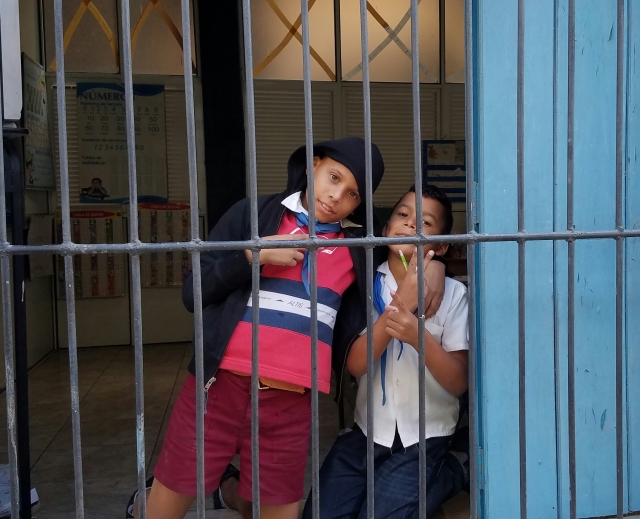 Walking by a school, these kids knew an obvious tourist when they saw one and asked me to take their photo. 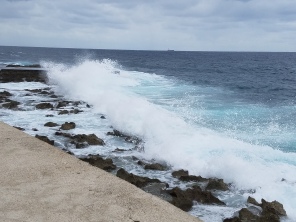 All photos credited to me Peter McCarthy